Agricultural Workers and Extreme Heat in the Age of Climate Change

Jaime Nuño-Sanchez died on September 21, 2015 in Thermal, CA after taking a break from picking lemons; the apparent temperature was 105. Nuño-Sanchez was a seasoned picker with 30 years of experience working in the Coachella Valley, yet he still succumbed to the heat, leaving behind his wife and three children.

Tragically this story is not as rare as it should be, the death of three farmworkers in Kern County two weeks ago may be attributed to the extreme temperature. 2016 is slated to be the hottest year on record, followed by 2015 and 2014. As climate change increases temperatures and the frequency of extreme heat events, agricultural workers are among those who suffer the most.  From 2000 to 2010 there were 359 occupational heat-related deaths reported to the Bureau of Labor Statistics, Census of Fatal Occupational Injuries database. The true number is likely far higher, due to under-reporting associated with linguistic and cultural barriers, immigration status, and other factors that may result in reluctance to report illness or death.

A previous Alliance blog, “Protecting employees during extreme heat events”, looked at some general issues about workers and heat illness. Today we explore in greater depth the barriers agricultural workers face in the prevention and treatment of heat-related illness (HRI), and policies that could provide better protection. While both Washington state and California have taken significant steps to protect workers during periods of extreme heat, the continued occurrence of farmworker heat-related morbidity and mortality shows that these measures are not enough. 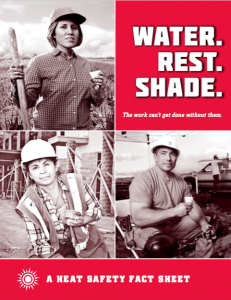 Environmental factors that contribute to heat-related illness include temperature, humidity, shade, and wind. Culturally and linguistically appropriate worker education to promote awareness of these factors is important, but insufficient. Federal OSHA provides educational materials in English and Spanish that emphasize “Water. Rest. Shade.” While well-designed, with ample use of illustrative images and low-literacy phrases, none of these materials reference the factors that may discourage or prohibit a worker from engaging in safe heat practices.

Given the limited effectiveness of educational materials on their own, it is highly important to modify the workplace to reduce the risk of HRI. Federal OSHA has failed to enact a national heat standard despite petitions from various groups including Public Citizen, co-signatories of which included Farmworker Justice and the United Electrical, Radio and Machine Workers of America. OSHA justified the rejection under the pretense that the hazards of extreme heat “do not meet the legal requirement of grave.” While federal OSHA has neglected to implement a national heat safety standard, Washington and California have taken the initiative to enact state heat safety standards. Washington’s Outdoor Heat Exposure Rule, in effect from May 1 through September 30, provides guidelines for appropriate and acceptable clothing, personal protective equipment, water provision, heat education, and response to HRI symptoms. The rule outlines the responsibilities of employers and employees, illustrating the shared responsibility of HRI prevention. California updated its heat illness prevention standard in February 2015. New elements include close observation of new employees during their first two weeks in high heat areas, provision of at least enough shaded space for all workers, access to water that is “fresh, pure, suitably cool, and provided to employees free of charge,” and the development of emergency response procedures. While these policies and systems help support safer practices during extreme heat events, there are still significant shortcomings and opportunities for improvement.

Barriers to HRI Prevention and Treatment

A study led by Dr. June Spector of the University of Washington School of Public Health, identified several factors that were associated with self-reported HRI, including  piece-rate pay and longer distance to restrooms. Workers that receive piece-rate pay as opposed to hourly-rate pay are compensated based on their productivity. While this may increase take-home pay, it also disincentivizes taking adequate breaks for rest and water. Similarly, longer distances to restrooms may discourage adequate hydration; workers may inadequately hydrate because they do not want to sacrifice productive time on a longer walk to and from facilities. Washington state’s Supreme Court recently addressed the issue of pay during breaks for piece-rate workers: “rest breaks for pieceworkers [must] be paid at least at the applicable minimum wage or the employee’s regular rate, whichever is greater.” 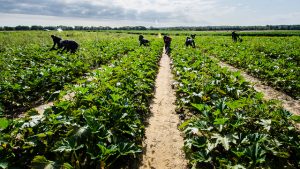 Dr. Spector also noted certain practices that may improve the response to (and reporting of) heat illness. The  use of a “buddy system” allows workers that know each other to monitor changes in behavior, because confusion and diminished awareness can be some of the first signs of HRI. Additionally, employers and health workers need to ensure that the education programs workers are receiving are adequate and effective, culturally and linguistically competent, and reinforced throughout periods of high risk.

Undocumented agricultural workers are a particularly vulnerable subset of the agricultural worker population.  Nicole Marquez of Worksafe, offered her expertise and recommendations on the topic. Marquez notes that while there are services and protocols in place for reporting illness and/or unsafe working conditions, undocumented workers may not do so for “fear of rocking the boat” and becoming the victims of unjust retaliation. The process of filing an OSHA complaint may also be unnecessarily opaque and limited in linguistic and cultural appropriateness.

Climate change increases the risks of heat illness and deaths for all agricultural  workers, but undocumented workers face the highest risks. Marquez describes concrete actionable steps that can be taken to reduce the risk of HRI in undocumented populations.

As the frequency and intensity of extreme heat events increases in the coming years due to climate change, it is imperative that state governments and public health agencies establish policies and systems that work for the economic and physical health of vulnerable workers. Following the precedent set by Washington and California, federal OSHA and other states, particularly those with large populations of agriculture and outdoor workers, should look to improve the heat rules and other protections for workers exposed to extreme heat.

See more from Grist on heat and farmworkers.

Savannah North is a recent graduate of Columbia University’s Mailman School of Public Health, and is currently an intern with the Center for Climate Change and Health.