Home / Blog / Wildfires and Public Health: A View from the Front Lines

Wildfires and Public Health: A View from the Front Lines

The Public Health Impacts of Wildfires 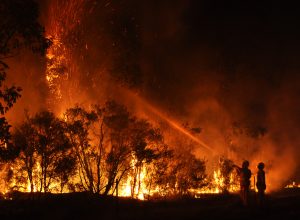 Wildfires are uncontrolled fires occurring in forests and vegetated areas that may spread rapidly and be difficult to control. Climate change is increasing the frequency and severity of wildfires due to increased warming and drought in areas such as the Western United States and Alaska. The impacts of increased wildfires will not only affect populations directly in wildfire-prone areas, but may also affect populations located thousands of miles downwind through smoke inhalation.

The composition of wildfire smoke is primarily made of carbon dioxide, water vapor, carbon monoxide, particulate matter, hydrocarbons and other organic chemicals, nitrogen oxides, and many other trace elements. However, smoke composition can vary, depending on the fuel type, fire temperature, and wind conditions. Of these pollutants, particulate matter (PM) is the most concerning, given their very small size and ability to be inhaled deeply into the lungs.

Exposure to PM generated from wildfires has been associated with a wide range of human health effects, such as wheezing, coughing, sore eyes and throats, and shortness of breath, to more adverse health outcomes, ranging from increases in asthma-related hospitalizations, chronic and acute respiratory and cardiovascular health outcomes, and premature death. 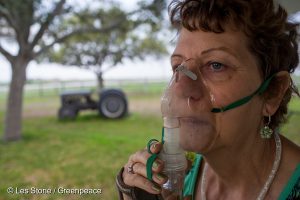 Children, those with cardiovascular or respiratory issues, and the elderly are some of the populations most vulnerable to wildfire smoke. Children are more likely to be affected by smoke inhalation due to their developing airways and increased exposure from spending more time outdoors. For those with existing cardiac or respiratory problems, such as the elderly, fine and ultrafine particles found in smoke can aggravate chronic heart and lung diseases, and has been linked to premature death within these populations.

In addition to vulnerable populations, firefighters face a number of occupational hazards.  Firefighters are exposed to significantly higher levels and longer periods of air pollutants from fires, leading to health risks that include decreased lung function, inflammation, and respiratory system problems, as well as physical injuries from burns and falling debris. Other common workplace hazards faced on the fire-line include being overrun by fire; heat-related illnesses and injuries; vehicle-related injuries (including aircraft); physical injuries; and exposure to particulate matter and other air pollutants in wildfire smoke.

Wildfires can also create an increased burden on healthcare and public health systems.  For example, wildfires near populated areas often necessitate large evacuations, requiring establishment of  shelters, and treatment of individuals for injuries, smoke inhalation, and mental health impacts. Increased housing development in or near the wildland–urban interface has expanded over the last several decades, placing larger numbers of people at risk. As these development trends continue, at the same time that climate change worsens, population vulnerability to wildfires increases.

A View from the Front Lines

In 2015, Lake County, California suffered the third worst fire in California history – the Valley fire.  Dr. Karen Tait, the Health Officer for Lake County, CA, explained, “Five years of severe drought helped to contribute to that fire. 50,000 acres were burned within 24 hours. There was a huge fuel load built up and combined with the drought conditions and wind patterns, that helped to accelerate the spread.”

“A lot of homes are built up in hills and mountains with poor ingress and egress. People with mobility problems are especially at risk. If they don’t have a car or have money to have gas, they might not be able to evacuate. Those who are mobility impaired are very much at risk, such as the elderly and those in hospice care,” she says. “In the Valley Fire, people had trouble getting out of their burning neighborhoods. People were just stuck in traffic, with flames burning all around. You can just multiply that risk if people couldn’t drive themselves or move quickly.” 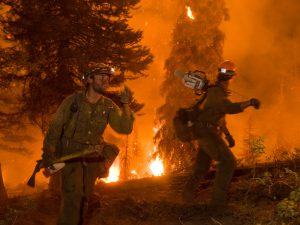 Dr. Tait also  highlights the unexpected challenges of a public health response to wildfires. “During wildfires, everything and everyone is at risk. You have to think about potential threats to hospitals, deploy veterinary disaster response to help the sick and injured animals, arrange for the removal of animal carcasses, and organize the debris removal of heavy or hazardous materials,” she says.

“However,” she notes, “following the wildfire, the psychological recovery of residents has been one of the most difficult problems. The loss of homes, livestock, and pets really affected people.” Emergency responders may be affected by long working hours, the stress of responding to a severe disaster, and personal loss. “For the Valley Fire, a huge number of our government employees were all impacted by being evacuated or lost their homes. It really complicated our response.”

Preparing for the Future

These challenges increasingly require that public health officials think beyond traditional public health preparedness. Dr. Tait notes, “People can be easily cut off if one road is blocked or is too narrow for emergency response vehicles to get through. We can take advantage of Active Transportation grant planning to widen roadways (for bike lanes and pedestrians) to improve evacuation safety. Through this, we can improve emergency evacuation and access for emergency response resources.” Additionally, Tait says, “Collaboration is effective and crucial. Regional planning and coordination with better equipped surrounding counties are a big part of the answer.” At the individual level, Dr. Tait emphasizes maintaining a defensible space around homes and healthcare facilities, and preparing for evacuations with a “go-kit.” She notes, “Make sure that you have your proper medication and equipment available, and know your closest evacuation route or meeting point. Make sure there is gas in your cars or buddy systems if you have no means for transportation, and plan for how to handle your pets or livestock if you do need to leave.” “Unfortunately,” she stresses speaking about the Valley Fire, “If conditions persist, we will continue to see more situations like this into the future.”

Bryan Moy is a doctoral candidate in the Environmental Health Sciences at the UCLA Fielding School of Public Health, and a Program Associate II for the Center for Climate Change and Health.