Disaster in the Pacific

“The Pacific Islands really get it – they are ground zero for climate change. The problem is a lack of funding to make necessary changes,” said Dr. Eileen Natuzzi, a San Diego-based public health surgeon and director of surgical education for the Solomon Islands Living Memorial Program. “They know what they need to do to increase resiliency. If you ask them, they’ll tell you – they want to move the hospital to higher ground, they want to build an inland road. But these are big changes that need to be made, and there simply isn’t enough money.” 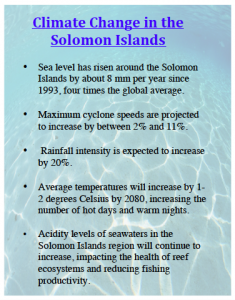 Dr. Natuzzi has spent the last four months working with the World Health Organization (WHO) identifying vulnerabilities in the Solomon Islands based on the 2014 floods. In partnership with the WHO and Ministry of Health, Dr. Natuzzi produced a report assessing the vulnerability of the health system infrastructure in the capital city of Honiara – and discovered that 70% of the health system infrastructure is vulnerable to flooding.

Other reports and assessments of climate change impacts in the Solomon Islands – a “National Adaptation Programme of Action” and a report of the economic impact of the 2015 flood – have outlined other vulnerabilities. Unfortunately, there is little funding for necessary adaptation projects. Other Small Island Developing States (SIDS) face similar challenges.

The series impact of the 2014 tropical storm has much to do with the already existing vulnerability of the islands, explained Dr. Natuzzi. “These islands are isolated,” she explains. “Their economies tend to be lean. Their resilience si very thin. Many of the Pacific Island countries are dependent on external aid.”

The Solomon Islands, where Dr. Natuzzi has focused her work, is one of the least developed Pacific Island Countries. Many factors contribute to an increased vulnerability to natural disasters in the Solomon Islands.

“So,” Dr. Natuzzi explained, “We need to understand that not only do the Pacific Islands face these extreme weather threats, they have no reserve or resilience.”

There are many serious health impacts of storms in the Solomon Islands. Direct impacts like injuries and drowning from the storm itself are frequently reported in the worldwide media – but other impacts are often overlooked.

Storm surges can also increase infectious diseases by contaminating waterways. Already, diarrhea is a leading cause of death in the Solomon Islands, contributing to 7% of all mortalities. And, because 89% of Solomon Island Residents grow at least some of their own food, when crops are ripped up during flash floods there are immediate nutritional impacts.

These indirect impacts disrupt education and create economic losses that affect the community-long after initial cleanup, impacting every resident’s health and well-being.

“In short,” explained Dr. Natuzzi, “the biggest problem in the Pacific Islands is that any weather event has a domino effect that hits on every sector in their economy and every aspect of their lives.” 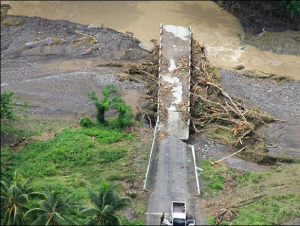 Climate Justice and Preparing for the Future

The Pacific Islands often receive international aid after extreme weather events, mostly from Australia and New Zealand. While emergency funding is necessary, proactive measures are needed to make these events less deadly and impactful. To achieve this, the US has recently launched the Pacific-American Climate Fund, a five-year USAID project that provides $25 million in grants to civil society organizations throughout the Pacific in support of climate change adaptation measures.

“However,” explained Dr. Natuzzi, “25 million over five years is not enough.” It’s a good start, but this grant is open to 16 different countries and supports more community-based adaptation methods instead of country-wide changes.” Dr. Natuzzi hopes to see the US develop a stronger climate change program with the Pacific Islands. Future opportunities for this include:

In preparation for COP21, scheduled for this December in Paris, Pacific Island nations are banding together to make their voices stronger, stressing that they are not responsible for majority of emissions yet are suffering disproportionately from climate change impacts -something also known as climate justice.

The goal of COP21 is to achieve legally binding and universal agreement on emission reductions, with the aim of keeping global warming below 2 Celsius. The fate of many Pacific Island nations hinges on a determined and cohesive global mitigation strategy in addition to financial assistance from responsible polluters.

To read the Rapid Assessment of the Macro and Sectoral Impacts of Flash Floods in the Solomon Islands, click here.

Many thanks to Dr. Eileen Natuzzi for speaking with me on this issue and for her continued dedication to advancing development and adaptation in the Pacific region.

The author of this blog post is Brittany Whited, who was a 2015 intern at the Center for Climate Change and Health (Oakland, CA) while completing her MPH program in Environmental Health Science and Policy at George Washington University.