We Are Still In: States, Climate Change, and COP 23

“We Are Still In” – that is the message that US states (along with cities, businesses, universities, and other organizations) delivered at the international climate negotiations in Bonn, Germany. The US Climate and Health Alliance was also there to share our work to mobilize health professionals to engage in state climate policy conversations and follow climate and health developments at the meeting. 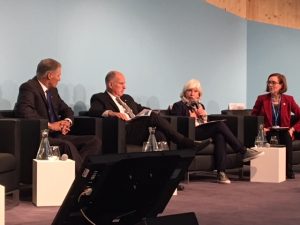 US states played a prominent role at COP 23 given the federal Administration’s plans to withdraw the US from the Paris Agreement. A bipartisan delegation of 11 states, which included four governors – Kate Brown (OR), Jerry Brown (CA), Jay Inslee (WA), and Terry McAullife (VA) – attended the COP meeting. It was the largest delegation of US states ever in attendance at a COP meeting. Multiple events were held to showcase the climate action these states are taking.

In conjunction with their attendance in Bonn, many states also announced further initiatives to address climate change. The US Climate Alliance – a bipartisan coalition of 15 US Governors – in partnership with Canada and Mexico counterparts announced the initiation of a North American Climate Leadership Dialogue to work to strengthen climate efforts. Eight Northeast and Mid-Atlantic states who are part of the Transportation and Climate Initiative issued a call for public input on potential policy approaches to foster a cleaner and more resilient transportation system.

Understanding the importance of subnational actors, the 5th Annual Global Climate and Health Summit held alongside the COP 23 meeting focused on ramping up action on climate and health at the subnational level – in regions, states, and cities. 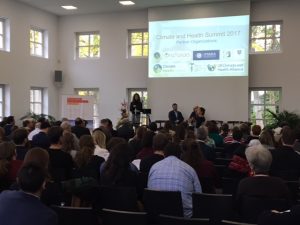 USCHA’s State Policy Initiative – an initiative to mobilize Alliance members and other health professionals and health organizations in the U.S. to engage in climate policy discussions at the state level – was featured in one of the World Café breakout sessions. Participants discussed what strategies/tools/resources are needed to effectively mobilize and support health professionals in taking action on subnational policies. Proceedings of the conference are expected in late December and this blog will be updated once they are released.

A number of other health-related developments occurred which are well described here. One of the most notable involved a former state Governor – Arnold Schwarzenegger from California – who delivered a strong message that health must be central in climate action.

Leading up to next year’s COP meeting in Poland – COP 24 – a global summit of non-state actors (city, state, business, and civil society leaders) will be held in September 2018 in San Francisco, California to strengthen the push for greater emissions reduction targets. This summit will provide even more opportunities to hold up and use our climate and health work to amplify action. Stay tuned for more news on this and ways to participate. And in the meantime, be sure to use the resources that are available through our State Policy Initiative to advocate for strong climate action in your state. As you can see from this blog, what states do here in the US on climate change is being heard around the world.