John Muir, Theodore Roosevelt, and Stephen Mather were champions for the establishment and preservation of the National Park Service, believing that the natural beauty of the United States landscape should be protected and preserved for future generations. 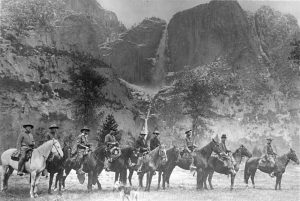 However, they could never have predicted within a century the extent to which climate change would threaten these national treasures. According to the National Park Service, climate change is significantly impacting the ‘health’ of parks: sea level rise in Everglades National Park, glacial recession in Kenai Fjords, species loss and wildfires in Sequoia National Park, and ocean acidification at Point Reyes National Seashore are only a few examples of the serious ramifications of climate change. Extreme rain in Arizona resulted in the collapse of two walls of historic structures in the Tumacácori national historical park; these are pieces of history and culture that cannot be replaced. We will continue to lose irreplaceable historical structures and swaths of land if we do not increase our efforts to combat the effects of climate change. [See Climate Central’s display of warming in national parks across the nation over the last 100 years].

Climate change is not only impacting the health of our National Parks’  native flora and fauna, but the health and wellness of human visitors too. National Parks, with their incredible diversity of weather and terrain, support many of the natural elements that encourage mental and physical health. The National Parks Service’s Healthy Parks, Healthy People initiative strives to “reframe the role of parks and public lands as an emerging, powerful health prevention strategy.” 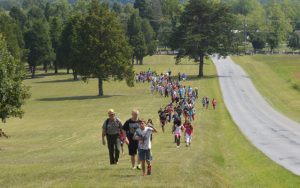 The Parks also encourage, and often mandate, physical activity, which is positively associated with improved physical and mental health. Recent research has found that living in green areas or within walking distance to greens spaces decreases morbidity and mortality associated with cardiovascular disease, stroke, obesity, stress, and depression. Trees and other plants improve air quality by removing gases and particulate matter, while also providing shade coverage and cool refuges. Parks and green spaces not only directly impact health by altering the environment, air quality and temperature, they also facilitate social and community interactions, which in turn support stronger and more diverse social networks and communities. In this way, protecting national parks by slowing the effects of climate change will help preserve human health and wellness.

Groups large and small across the nation are working to protect our national parks and combat climate change. The Sierra Club, founded by John Muir, was an early leader in the movement to both preserve the nation’s wilderness areas and to encourage the public to get out in nature.  Newer groups like GreenLatinos are working from the bottom-up to advocate for environmental conservation and community engagement, specifically with Latino communities. In July, over 100 members of GreenLatinos gathered in Grand Teton National Park to learn, connect, and collaborate about the most effective means to advocate for park protection and encourage Latinos to visit national parks. Organizations like these two and many others are vital to preserving our national parks and promoting community engagement and activity in public outdoor spaces. 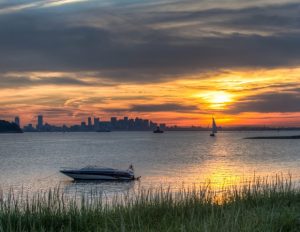 Our national park heritage is something ALL Americans should be able to enjoy and learn from, whether located in pristine wilderness areas or bustling urban centers, like the Boston Harbor Islands National Recreation Area or the Mississippi River and Recreation Area in Minneapolis and St. Paul.

As we wish our National Parks a happy 100th birthday we should also appreciate our local parks and green spaces, which, while rarely as grand, can afford similar benefits to human health, and they are just out the door from where most people live. Urban greening including  green infrastructure  and urban forestry, can help buffer the effects of urban heat islands and increasing temperature in a warming climate. Green Guerrillas based in New York works with communities and young people to establish and maintain community gardens, grow their own food, and advocate for green spaces in their communities. Engaging young people in outdoor work, whether community garden building or trail maintenance, facilitates youth and community investment and social cohesion. 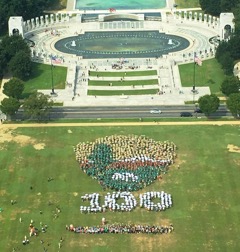 Grassroots organizations have the power to shape the green movements in their cities and advocate to preserve local and National Parks. Philadelphia’s city government collaborates with civic groups to establish bioswales and green spaces to improve stormwater management, while simultaneously improving public safety and health by reducing crime in these areas.

The best way to celebrate these priceless national treasures is to encourage our families, communities, and elected officials to recognize the multiple benefits of our parks, large and small, and protect them from the threat of climate change.