In creating strategies to face the effects of climate change, we also have the opportunity to address inequities that weigh heaviest on our most vulnerable communities. The factors that have made low-income communities and communities of color most vulnerable to climate change are the very same factors that we must address to adapt to threats without leaving anyone behind. Climate change is a threat multiplier, exacerbating existing vulnerabilities such as chronic health issues, lack of access to emergency resources, and more. Georgetown Climate Center (GCC) recognized that practitioners and decision makers need a home for resources focused on making equitable adaption a priority instead of an afterthought—so with the help of partners they created the new Adaptation Equity Portal.

GCC, in partnership with Urban Sustainability Directors Network (USDN), WE ACT for Environmental Justice, Emerald Cities Collaborative, the Gulf Coast Center for Law & Policy, Future Insight Consulting, and the National Association for the Advancement of Colored People, USDN, and representatives from Seattle, Cleveland, Washington, DC, Baltimore, added this database focused on equity to their existing Adaptation Clearinghouse. The larger Clearinghouse is “an online database and networking site that serves policymakers and others who are working to help communities adapt to climate change.” It holds thousands of resources, navigable by topic area, geography, tool type, and more. Users add to the usability of resources by rating and commenting on their effectiveness, accuracy, relevance, and other factors. 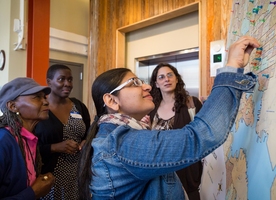 The new Adaptation Equity Portal holds tools and resources for “decision-makers and practitioners to operationalize equity.” Importantly, the Portal includes resources outside of the realm of what the Adaptation Clearinghouse has previously included, understanding that “any action that decreases social inequality helps people become more resilient.” The Portal brings together what communities and groups around the country—each with its own historical and contemporary contexts—are learning and doing to address social equity issues. Such resources include this report on New York City’s Build it Back program following Hurricane Sandy, which “highlight[s] its commitment to equity in the rebuilding of residential neighborhoods” as a program that “set a precedent for local hiring resulting in career-track jobs for low-income Sandy-impacted residents.”

As a nonpartisan convener, GCC brings together many people and perspectives and focuses on using lessons to provide guidance and resources. We spoke with GCC’s Institute Associate Melissa Deas about the creation of the Portal, and the vision for its future.

Deas’s first step to creating a successful portal was to create and foster partnerships. The expertise of partners provided a necessary framing for equity in the context of the Adaptation Clearinghouse, guided by the “voice[s] of people of color and low-income people not typically engaged in planning processes.” Deas looked to people she and her team had worked with before, as well as others who had similar grants to work on equity in adaptation. Leaders of color and people who work closely with community groups were brought in as experts to help in the design of the Portal, modeling the way resilience building is known to be most effective—by engaging partners from the start.

GCC hosted a two-day meeting with equity and adaptation experts, which provided the foundational elements of the portal, including building trust between agencies and community members, and creating partnerships beyond just in name.

Looking forward, Deas hopes to extend GCC’s role as a convener and bring together folks on the ground facing challenges in equity and adaption work. Deas is also hoping to compile more analytical resources such as a social equity toolkit that would include examples and case studies of how people are funding equity work, what legal challenges they are facing, analysis on successes, and other important pieces that would encourage more successful equity work and adaption. Following up with the teams doing this work, says Deas, would be an important way to share lessons learned.

While there is always desire for more resources highlighting those breaking ground on equitable adaptation projects, the Portal still has quite a spectrum of resources that highlight challenges and barriers associated with this work as well. Ultimately, says Deas, seeing “all of the different examples of people trying to answer these really hard questions… is grounding. Especially when things seem to not be happening fast enough” it’s a good reminder that things are, in fact, moving.

We’re thrilled to see so many interdisciplinary, equity-focused resources gathered in one place. As we move forward in the field of climate adaptation, we continue to hold equity as a top priority. Don’t forget to bookmark the Adaptation Equity Portal, create a profile, and check back often, as resources are constantly being updated. Learn more about potential opportunities to partner with the Adaptation Clearinghouse. Check out the other work of the Georgetown Climate Center here and join the US Climate and Health Alliance to receive updates on the newest initiatives, events, and resources around climate change and health.