Drought in the Central Valley

Tulare County, located in the fertile Central Valley of California about half-way between Los Angeles and San Francisco, was the leading producer of agricultural commodities in the nation in 2014, yielding and abundance of milk, grapes, and nuts. About 1/4 of all jobs in the county are directly related to farm employment, with many others revolving around servicing this industry.

The county’s 450,000 Residents rely on steady harvests to sustain their livelihoods and incomes, and in a county where 1 3 of the residents live in poverty and 60% are Latino, an unreliable harvest due to drought can leave some will little economic opportunity. Unfortunately, in the midst of California’s worst drought in 1,200 years, Tulare County is Drought Central.

Rozell is helping to manage this crisis for the Tulare County Health and Human Services Agency. As of July 27th, 2015, there were close to 1,500 domestic well failures in the county, more than half of all such failures in the state. In Tulare, well failures have left between 5,000 and 7,000 people without water, or with water of extremely poor quality. The number of well failures continues to rise each week.

The Tulare County Drought Task Force was created shortly after the declarations of drought emergency by Governor Brown (January, 2014) and the county (February, 2014). The Task Force brings together many county agencies and representatives from cities, non-profits, and community volunteers. This coordinated approach facilitates centralized information gathering to foster a coherent and targeted response plan. “Rain is what we really need to end this crisis,” says Rozell, “but in the meantime there are things we’ve been able to do to bring some sense of normalcy to residential life for those who have lost running water.” Some of the programs that have been implemented include:

■ Single point of contact through 2-1-1 for residents to report drought-related emergencies and access drought-related services and information: The use of 2-1-1 has also allowed better tracking of well failures and associated community needs.

■ Water tanks: 169 families have received 2,500 gallon potable water tanks, directly connected to home plumbing systems. The tanks – which provide water for three people each – must be refilled bi-weekly to provide 50 gallons of water per person per day. “We want to get as many people as possible on these tanks,” stated Rozell, “and we have over 100 more set to go out.”

■ While yet to be allocated, the Governor’s 2014 executive order budgeted for $6 million for voluntary relocation assistance of California residents, providing them with relocation expenses plus 12 months of rent differential. 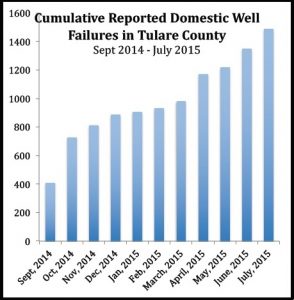 Farmers in California use 80% of the state’s available water. But this year, many farmers have received no irrigation water at all, resulting in the fallowing of over 500,000 acres of crop land. This, in turn, has led to significant job loss for farmworkers and others whose jobs are farm dependent. The resulting heavier reliance on emergency and social services has been notable. FoodLink, a local nonprofit, has distributed nearly 160,000 drought-related food relief packages to eligible households -those that have had no work or fewer hours because of the drought. The increased demand on local services likely doesn’t illustrate the full impact, however, as some families of farm workers have already begun to leave drought-stricken areas – likely decreasing these numbers.

There are other health impacts of drought as well. Drier soils lead to increases in particulate matter, and tinder-dry forests are burning in explosive wildfires with large smoke plumes. Rozell explained, “The central valley is already a place with lower than average air quality, and the county is anticipating increases in respiratory illness.” There are also concerns about vector-borne diseases such as West Nile Virus, as stagnant water in sewer systems that have not been flushed out with rain provides breeding grounds for mosquitos. 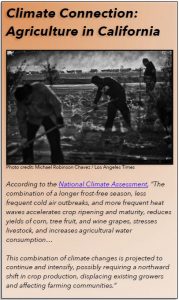 As farmers and others become more and more desperate for water, those with the financial resources to do so are drilling deeper wells. Tulare County’s Environmental Health Department has approved over 3,684 drilling permits for wells since January 1, 2014. But sucking more groundwater out of already depleted aquifers is can be maladaptive- subsidence (the gradual sinking of land, in this case due to manmade underground holes) has been so severe in some areas that ground water aquifers are in danger of permanently losing their ability to recharge.

While the programs in place are helping some residents, implementing them has not been easy. Many Tulare County residents are undocumented and disenfranchised. Some fear that reporting a well failure may lead to losing their homes, or actions involving immigration or child protective services. They also face substantial financial barriers exacerbated by the economic impacts of the drought on jobs and income.

Broad stakeholder and community group engagement has been essential in building trust and thus enabling all residents to feel confident that seeking assistance for drought-related problems will not lead to adverse consequences. Community partnerships can be financially advantageous as well, “for example,” explained Rozell, “state emergency funding reimburses government organizations at up to 75% of cost, but non-profits may be eligible for up to 100% reimbursement.”

Rozell recommends that local health departments and community partners are proactive in planning for the impacts of climate change on community water supplies. “Learn about the community, learn about water resources, learn things you didn’t know you needed to learn,” he explained. “Make all the friends you can – your water providers, people at the state department of water resources, the district water engineer. Bring as many stakeholders to the table to be as effective as you can in tailoring response to the local community.”

And most importantly, “start planning for the long haul and understand how climate change might create water challenges you never imagined- work with these partners to look for longer-term solutions.”

Many thanks to Dave Rozell for agreeing to this interview and providing the above resources.

The author of this blog post is Brittany Whited, who was a 2015 intern at the Center for Climate Change and Health (Oakland, CA) while completing her MPH program in Environmental Health Science and Policy at George Washington University .

When Dave Rozell became the Public Health Emergency Preparedness Manager for a small local health department, the last thing he expected was that he would be working 24/7 to provide water to over 5,000 residents whose faucets ran dry. But in Tulare County, CA, an unrelenting drought is stressing the local economy and causing an unprecedented level of hardship.